Galectin Therapeutics, Inc. (NASDAQ: GALT) presented at the HC Wainwright Conference at 9:35 EST yesterday.  This was the first conference call for the newly appointed CEO Harold Shlevin.  For most of the presentation he was relatively monotone and very matter of fact.  He became animated to stress that the second cohort was only based on 3 patients and that there was great risk in early stage trials.  Then he resumed his monotone on the very next slide that showed complete tumor resolution of a patient in the cancer trial.  Some GALT investors will realize that this patient was Mark Hornibrook who was featured in a Providence Cancer video when he shares his results on the computer screen in the background that contains his PET scan. The bombshell for investors came at approximately the 21 minute mark when social media erupted about the bombshell which led to a small temporary rebound in price and then dipped after the media failed to gain any traction.

At 21:40 in the conference presentation Shlevin said “they are monitoring in people the immunosuppressive pathways of the immune cells in combination with the therapeutic responses and we will hope that we will have some of that data available at the time we report phase 3 results.”  While this statement looks innocuous on the surface in context it reveals a Freudian slip that could mean very positive clinical trial results are forthcoming.  GALT has openly stated in the latest 10-Q that they will present data by Summer 2018 which is by 21 September.  They are due to report the 3rd and final cohort of the phase 1 study not the phase 3 study as Shlevin suggested in the webcast.  Before this webcast their follow on plans were for a future phase 2 study and movement to a phase 3 would be a significant acceleration of their plans.  It’s quite possible that when Shlevin was talking about the immunosuppressive pathways it reminded him of the justification that Providence was going to use to move to a phase 3 SPA due to the robust data set.  This is the Freudian slip that social media latched on to.  Here is some of the chatter that ensued. 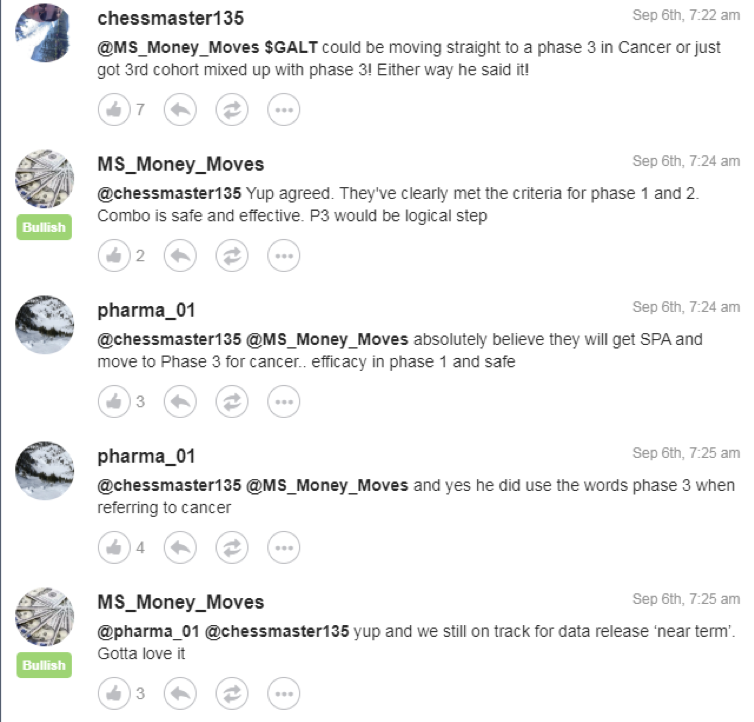 This isn’t the first time GALT has downplayed trial results only to come up with stellar results.  In Sept 2016 the company reported that they failed to meet the endpoint in their psoriasis trial and then less than 90 days later reversed course and announced that they would be seeking a drug partner after revealing this before and after picture of a psoriasis patient.

The most reactive platform for social media for GALT seems to be Stocktwits.  The post volume peaked at 1000 daily posts into the conference announcement and many were immediately commenting on the conference as the presentation was given. 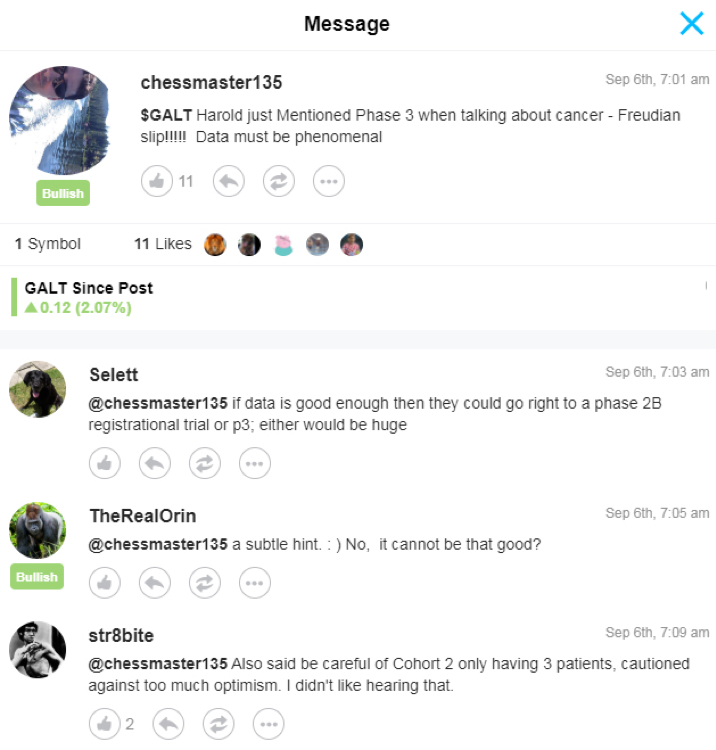 On the conference call Shlevin did break the news that they were finished dosing the patients.  The slide that detailed the protocol indicated the 3rd cohort dosing was underway but Shlevin said “we are waiting on results from cohort 3 . . .  The target was 10 patients and they have completed the dosing of those patients.”  The significance is that the completion of dosing needs to happen before results can be compiled.  This verbiage was not used during the 10-Q so it’s reasonable to expect that shortly after the 10-Q they finished dosing their last patient and are now getting around to compiling the data on this 10 patient cohort.  The company has moved the goal posts three times in regards to this announcement.  Providence first indicated in November 2017 it would release the data in the first half of 2018, then Galectin guided toward Mid 2018, with the most recent guidance of Summer 2018.  With this breaking news from Shlevin, investors are now reassured it’s simply a matter of crunching the data on 10 patients. 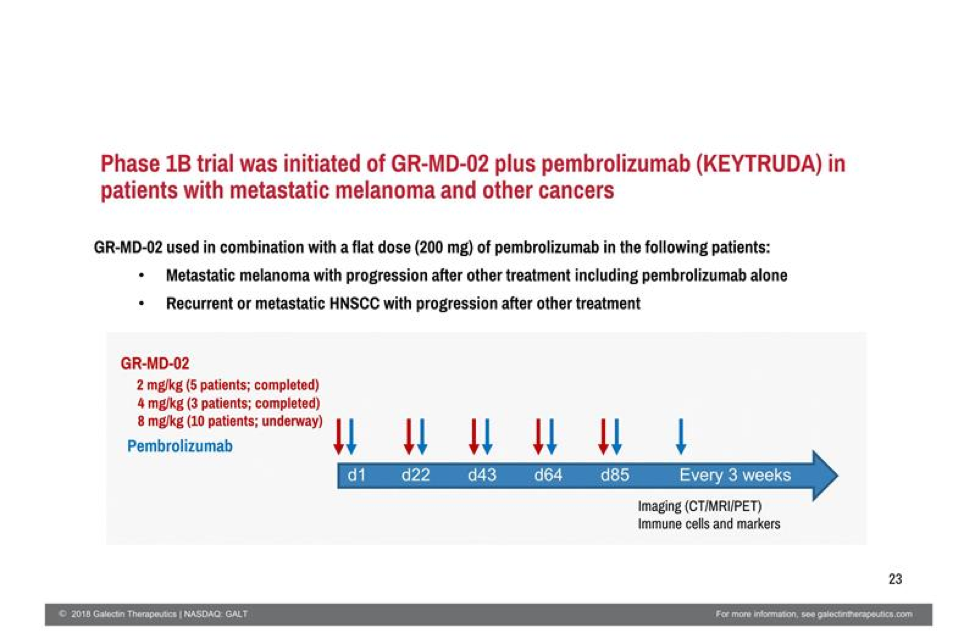 During the presentation Shlevin went out of his way to downplay the data.  The question is why would a CEO go to a conference and downplay the data?  Some theories in social media revolve around the idea that the company actually wants the stock price down to minimize the dilution of the ex CEO’s stock options which are set to expire around October 5th.  While this is plausible the company loses out on a great fundraising opportunity of raising millions of dollars if the stock goes above the options exercise price.  Shlevin also cautioned that “it’s important to understand that these patients would have what clinicians describe as very bulky tumor loads.”  Most would take that as a cautionary statement, but when you drill down and look at the data they are getting phenomenal results based on very refractory, frail and difficult to treat patients. 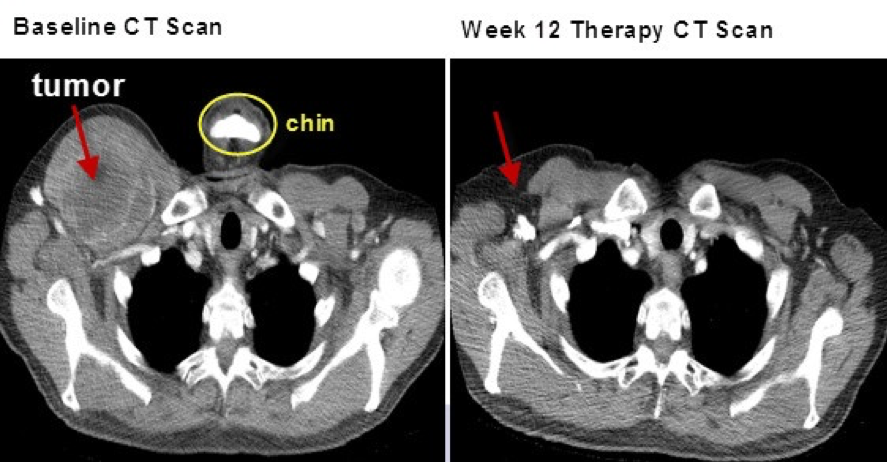 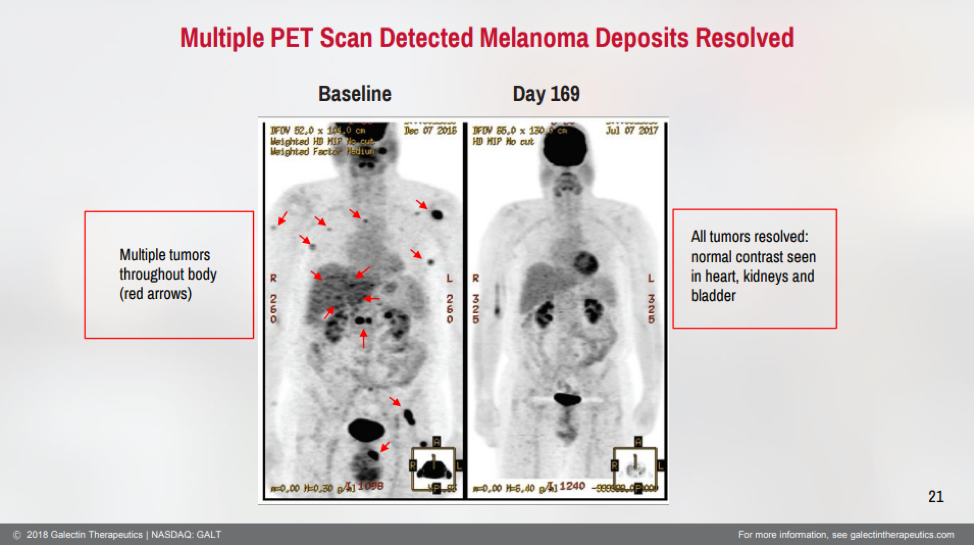 Shlevin also characterized the patient population as “often having other treatments including Keytruda alone.”  That means that some of the patients in this trial failed Keytruda and then tried it again in combination.  It’s amazing they were able to get any complete responses let alone 2 in the first two cohorts.  The other factor investors need to consider is the extremely condensed time frame of dosing which amounts to only 3.5 months on the therapy and these results are being compares to Keytruda’s 2 year response rate.  The drug works based on galectin expression which varies from patient to patient and disease to disease.  So if the trial recruited patients that didn’t have a high galectin overexpression the drug might not work as well.   It’s unclear what this grandstanding about the data is all about but past history has indicated that this company has a tendency to down plays great data and promotes controversial data.  Traber promoted a breakthrough therapy status on NASH Cirrhosis that never happened while he went out of his way to say the company failed to meet endpoints on the psoriasis trial that they didn’t even finish only to report an exceptional report after they crunched the data. 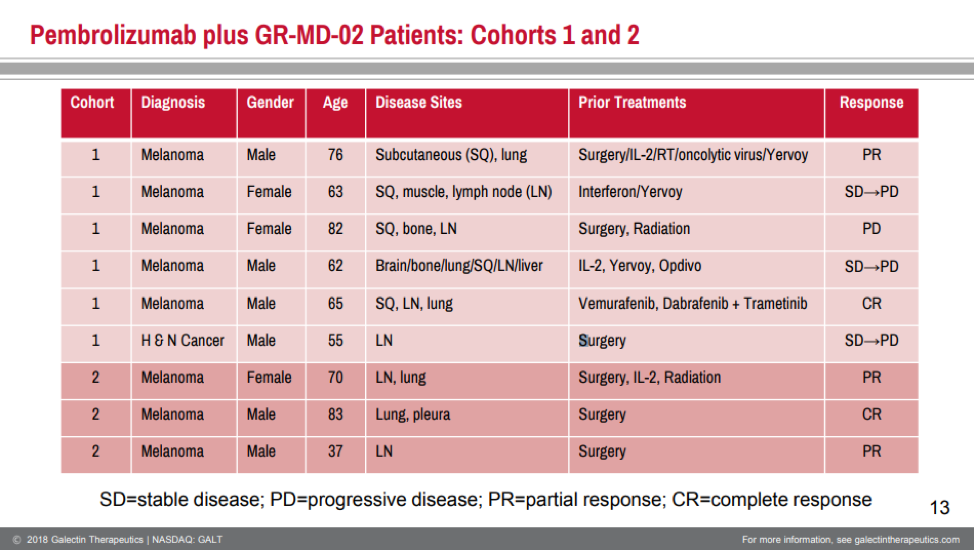 This presentation gave a glimpse into the trial design of the phase 3 NASH Cirrhosis trial that they are working on.  In the presentation Shlevin indicated that the primary endpoint would be the progression to esophageal varices.  Based on the statistically significant data this is an easy to reach endpoint since Shlevin pointed out “no patients in the 2 mg/kg group developed varices.”  The other endpoint is going to be the change in hepatic venous pressure gradient (HVPG).  The read out in the 8mg cohort complicated the trial results because the HVPG which didn’t seem to correlate with the patients with esophageal varices because the blood was already diverted and relieving the pressure on the hepatic vein.  When discussing the results of the 8mg/kg cohort, Shelvin said “we believe this is accounted for by the variations in the pharmacokinetics in the cirrhotic patients which put a port of the 8mg dose well outside the therapeutic window.”  This means that when they parsed the data they found out that some of the 8mg patients outside the therapeutic window didn’t respond while the one in the therapeutic range did. 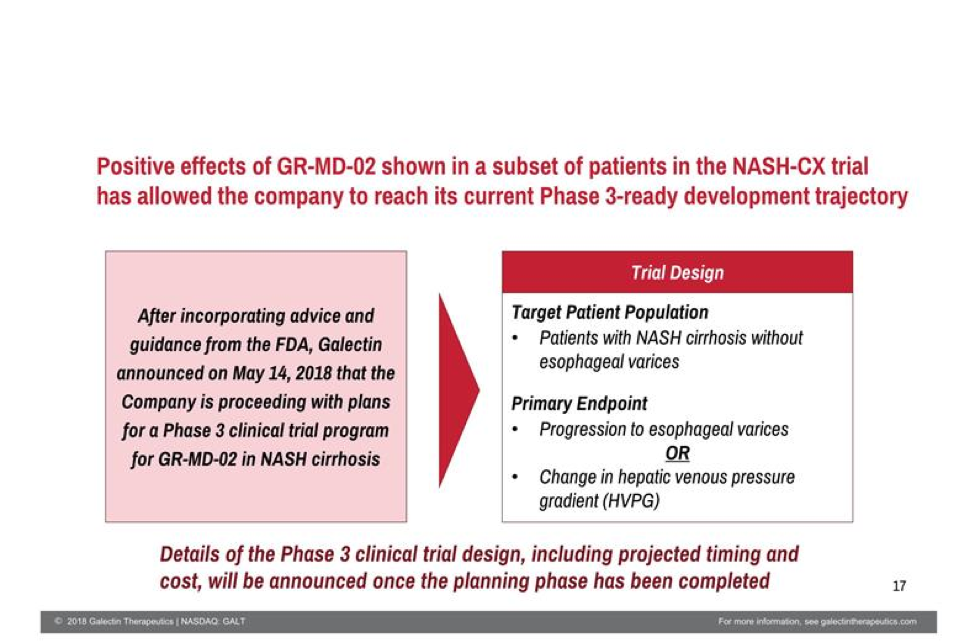 This oversimplified trial design without the possible need for HVPG if approved by the FDA completely derisks the trial and makes them a very attractive buyout candidate.  Big pharma will love an easy to reach clinical endpoint allowing them to do the minimum amount of patients which would make the trial quick and cost effective.  GALT has a “phase 3 ready” clinical trial with a simplified design and is the first drug to show efficacy in NASH Cirrhosis which is a multibillion dollar market.

There is some risk going into the cancer results as Shlevin emphasized, but the picture he painted was so bleak it’s amazing they got any results to begin with.  The trial design was so stacked against them as patients who failed Keytruda were included in the cohort so GALT’s lead candidate GR-MD-02 had to do the heavy lifting all by itself.  Add to this the bulky tumor loads of these hard to treat patients.  One patient had a softball sized tumor that resolved in 3 infusions depicted above.  The Mark Hornibrook story confirmed that the other complete response in the first cohort wasn’t a fluke as this patient was apparently cured of metastatic disease as evident in his last blog posting.  The variability in these patients pharmacokinetics which translates to their level of galectin expression is key as Shlevin pointed out in the NASH part of his presentation.  All this empirical data suggests the results might be very good if investors take time to dig into the immunosuppressive pathways of the upcoming presentation instead of the headline of complete response or objective responses.  However, good cancer data isn’t even remotely priced into the stock.  A typical phase 2 cancer company is worth about $300 – 500 million.  GALT has a market cap of $222 million and has both a phase 3 ready NASH candidate and possible a phase 3 ready cancer candidate based on the Freudian slip.  If the Freudian slip is true this stock is exponentially undervalued.  If it’s not true as a minimum it looks as if GR-MD-02 is close to advancing to a phase 2 cancer company with one of the lowest valuations in its peer group. 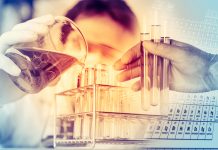 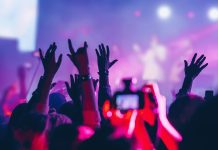 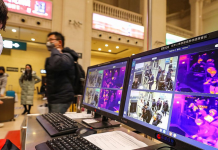