CytoDyn Inc. (OTCMKTS: CYDY) released its Triple Negative Breast Cancer (TNBC) data in an 8-K filing last week, showcasing leronlimab’s extremely promising future in cancers, especially TNBC.  The data was compiled by Creatv Bio and plotted historical comparisons to chemotherapy versus the current standard of care (SOC) and Todelvy, the last drug approved in TNBC.  This is the data set they are using to present their case to the FDA for a Breakthrough Therapy Designation (BTD).  To set the stage, the company gave anecdotal testimonies from two patients: a metastatic prostate and bladder cancer patient.  The reason was twofold: to show that patients that respond tend to hold their response for an extended period of time beyond 18 months, and that the responses were profound in safety. The testimonials were anecdotal evidence that lowering CAMLs and CTCs are very important to prolonging life, without the agonizing side effects that come with chemotherapy or antibody-drug conjugates like Gilead Science’s (NASDAQ: GILD) Trodelvy.

The Case For a BTD

On a number of comparison charts, using either Progression Free Survival (PFS) or Overall Survival (OS) as the endpoint, leronlimab’s efficacy was similar or superior to Trodelvy.  CYDY’s clinical trial of mTNBC was designed for first line patients vs Trodolvey which was approved on third line patients.  Third line is treatment that is given when both initial treatment (first-line therapy) and subsequent treatment (second-line therapy) doesn’t work, or stops working. Typically this would not be a fair comparison as third line patients have more resistant cancer, but CYDY revealed that 21 patients were from compassionate use and the other 9 were from the mTNBC trial.  Compassionate use in patients that have no other treatment option and typically means the cancer is the most progressed, and on clinicaltrials.gov, one can see that CytoDyn was looking to enroll compassionate use patients with mTNBC who had failed 3 or more systemic therapies, which could be considered fourth-line therapy.  This essentially makes this a reasonable comparison, as some patients were on first-line therapy, while most others were past third-line therapy.

In the final analysis leronlimab was much better than the standard of care in ALL comparisons and equivalent or superior to Trodelvy.  The thing that would greatly tip the scales in favor of leronlimab in the eyes of the FDA is the non-toxic safety profile; as CytoDyn highlighted on their conference call, some patients would rather die than go through another chemotherapy.

The other analysis CytoDyn provided seemed to focus on the predictive value of biomarkers.  They performed CCR5 staining of the tumor and looked at CAML and CTC’s before treatment.  Low CCR5 was somewhat positive in predicting treatment.  This observation is inline with the thinking that higher levels of CCR5 allow for more trafficking of tumor cells and greater metastasis.  It appears that leronlimab low dose, 350mg, had a stronger effect on low CCR5 patients, as there was enough leronlimab to block all CCR5 on patients who only had low expression of CCR5.

This suggests that if CytoDyn moves forward with the 700mg dose, they could have a profound effect—even better than was observed in this data readout—in their next trial if they use the higher, more efficacious dose (for highCCR5 expressing cancers). So, investors could expect even better efficacy in subsequent trials, with an optimized dose, with high CCR5 expressing patients responding better.

Stoppage of TNBC trial for BTD

The benefit rate is so high that the company might never get to measure median survival in their mTNBC trial—some of the patients have responded so well and for so long that it is possible that 50% of the patients do not die in time for CytoDyn to report median overall survival. If this were the case, these results would be extremely profound. No matter what, the company needed to stop this trial because the results were too good to continue.  The study needs to be optimized to how well the drug is performing and much more is known about the MOA and the biomarkers used to measure disease progression and recovery.  In a worst case scenario the company gets new actionable endpoints that it can meet in the next trial, but best case is that meeting with the FDA results in a Breakthrough Therapy Designation (BTD).

Value of a BTD

During the latest investor call Dr. Kelly cited stats from a well cited research article on BTD.  He pointed out that if they apply for breakthrough therapy designation (BTD) and receive it, it could potentially reduce the approval time from 2.5-3.5 years. In a high value indication a BTD is worth  $8.3B value.  He highlighted that there are 23 possible cancer indications and pointed out that it is rare for a company with two BTD designations to not be acquired by big pharma; sometimes it happens with one.  Given the prior mentions about big pharma discussions and the tidbit that BTD sometimes happens with one there seems to be some truth behind the idea of big pharma partnering.  If this were to happen the credibility gap of management would instantly be forgotten.   ,

The Long-Hauler presentation on the shareholder call made it abundantly clear that leronlimab was having a profound effect on the disease.  Many of the symptoms went down (18 out of 24) and many were statistically significant.  The bottom line is that patients just feel better and are akin to the experience HIV patients have had taking leronimab where they just got rid of that brain fog that they had while taking their HAART regimen.  The biomarker data they had was compelling.  One of the highlights was the change in Natural Killer (NK) Cells which showed a dramatic shift higher and showcased an immune system that was functioning normally. 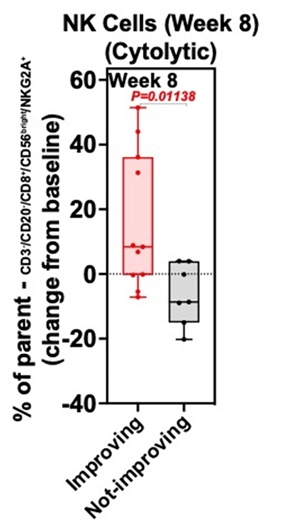 Many parts regarding the theory of Long-Haulers being a disease about viral persistence were confirmed by the biomarker analysis.  Restoring normal functionality to the immune system was noted by a return to normal T-Cell counts and an immune system that repolarized the macrophages from a proinflammatory state into homeostasis.  At baseline for both groups M2 macrophage polarization was up 66%.  Furthermore, the biomarkers were in sync with the symptom improvement.  This MOA was seen in COVID-19, Long-haulers, Cancer, and NASH.  Even Nature magazine started covering this Long-Hauler epidemic.

“In the case of acute COVID, we know that we need to block the virus and hyperinflammatory state. But the science behind long-COVID has lots of caveats, and we don’t really know what’s driving the disease. The targets are not well defined and correlated with the syndrome, and that might explain why industry is not jumping all over this because the market is potentially huge.”As mechanistic insights into long-COVID emerge, Ordonez expects industry funding will follow, with more biotech companies jumping in “within the next two to five years,”

CytoDyn is way ahead of the industry in this matter and it represents a significant competitive advantage.

The Brazilian trials are imminent.  There is movement on the Brazailian clinical trial websites that show an increase in the number of trial sites.  They also show ethics approval on July 22, 2021.  Many investors do not believe this will happen because the company keeps saying it will happen “soon.”  There are many investors waiting on the fence to buy on the news because then they know within 2 months, at least interim results will be released.  Those interim results should be a slam dunk for meeting their endpoint and therefore approval under an Emergency Use Authorization (EUA).  Many investors know this so dosing the first patient in the trial should be a market moving catalyst.  The company said that they would dose the first patient by the end of the month so their credibility is also on the line and many investors are watching from the sidelines.  The value investors are the one gobbling shares at the moment because they understand the trajectory of news is going to crescendo into October.

Dr. Kelly really seems to be setting the stage that a BTD is coming and along with it a pharma partnership.  Their case for BTD in TNBC is very strong.  Given reasonable timelines, this could all happen within the next 60 days.  This means that CYDY is grossly undervalued given that 2 BTD’s could happen in that time frame.  Assuming just one, the company should gravitate toward that $8.3 billion region which represents $13.6 per share.  The scientific data keeps coming in extremely positive and there will come an inflection point where investors abandon the idea that management is awful and that the FDA is corrupt and won’t give CYDY a seat at the table.  Catalysts like more data on TNBC in the form of tumor shrinkage, or the completion and readout of the Long-Haulers study, or even the stoppage of the NASH trial could be the spark that ignites the stock price again. Uplisted to NASDAQ Today! Patent Protection and Security in the Healthcare Space